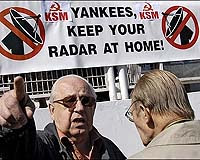 Recent disinformation by the western media about Russia starting a new Cold War not only masks the threat of a US Anti-Ballistic Missile shield deployment but, as always, projects the blame on the victim, Russia.

The US missile shield must be understood in the context of its geo-strategic nuclear deployment. Far from being defensive, its ultimate purpose is to obtain such an unassailable advantage over any other nuclear power as to be able to threaten any would-be opponent with nuclear extinction if it were not to comply with the wishes of the US.

This new form of nuclear strategy has been called 'compellence'. Remember the word because you won't hear it mentioned by the western MSM which has already tried to distract us from the real dangers behind the deployment of the US missile shield with matters which bear no relevance such as the Litvinenko affair and the inevitable Russian response to retaliate with its own missiles.

These European ABMs are an adjunct to the longstanding US policy of nuclear first strike against Russia, as explained in my book, The Criminality of Nuclear Deterrence.

By means of a US first strike about 99%+ of Russian nuclear forces would be taken out. So Bush Jr. needs ABMs to take care of what remains. And in any event what really matters here is the perception. Namely, the United States Government believes that with the deployment of a facially successful first strike capability, they can move beyond deterrence and into "compellence."

In other words, with an apparent first strike capability, the USG can compel Russia to do its bidding during a crisis. The classic case in point here was the Cuban Missile Crisis where the Soviet Union knew the USG could strike first and get away with it. Hence they capitulated.

This has been analyzed ad nauseam in the professional literature. But especially by one of Harvard's premier warmongers in chief, Thomas Schelling, winner of the Nobel Prize in Economics granted by the Bank of Sweden-- who developed the term "compellence" and distinguished it from "deterrence."

The USG is breaking out of a "deterrence" posture and moving into a "compellence" posture. Easier to rule the world that way. Henceforth the USG will be able to compel even nuclear-armed adversaries to do its bidding in a crisis or otherwise.

Deterrence strategy was abandoned over twenty years ago when the US upped the ante in its arms race by introducing new, microchip-controlled nuclear weapons, including the medium-range Cruise missile, and replacing the idea of deterrence with 'pre-emption' or first strike. It was no longer necessary to wait for the other side to attack first. Instead, you attack first if you think the other side is planning to attack you.

Any sane person can see the danger in a strategy that inevitably leads to paranoia. But when you add to it the fact that everything is handled, not by humans, but by computers a War Games doomsday scenario is what we are faced with.

What the US is now dumping is no longer deterrence. That was dumped over 20 years ago. What it's doing is to develop the second stage of First Strike by introducing an element, compellence, which will effectively coerce all its competitors, through terror, to do its bidding.

It was concerning this that Vladimir Putin warned the world at the Munich Conference last February:

I am convinced that we have reached that decisive moment when we must seriously think about the architecture of global security.

In Russia’s opinion, the militarisation of outer space could have unpredictable consequences for the international community, and provoke nothing less than the beginning of a nuclear era. And we have come forward more than once with initiatives designed to prevent the use of weapons in outer space.

And, in the context of the expansion of NATO into the old Warsaw Pact countries:

It turns out that NATO has put its frontline forces on our borders, and we continue to strictly fulfil the treaty obligations and do not react to these actions at all ... I think it is obvious that NATO expansion does not have any relation with the modernisation of the Alliance itself or with ensuring security in Europe. On the contrary, it represents a serious provocation that reduces the level of mutual trust.

And we have the right to ask: against whom is this expansion intended?

Remember, it is in the Czech Republic and Poland where the US now intends to install its ABM radar systems. The pattern of aggressive closing in on the USSR is clear for all to see.

Since September 11, the Bush administration has carried out an aggressive strategy to surround Russia with military bases, install missiles on its borders, topple allied regimes in Central Asia, and incite political upheaval in Moscow through US-backed “pro-democracy” groups. These openly hostile actions have convinced many Russian hard-liners that the administration is going forward with the neocon plan for “regime change” in Moscow and fragmentation of the Russian Federation. Putin’s testimony suggests that the hardliners are probably right.

Answering questions after his Munich speech, Putin warned the US that if it were to go ahead with a new arms race, including ABM deployment, Russia would respond asymmetrically.

So that everybody [should] understand that the anti-missile defence system is useless against Russia because we have certain weapons that easily overcome it. And we are proceeding in this direction. It is cheaper for us. And this is in no way directed against the United States themselves.

And, at the recent G8 Press Conference which the western MSM conspicuously didn't report:

We have learned from the Soviet Union’s experience and we will not be drawn into an arms race that anyone imposes on us. We will not respond symmetrically, we will respond with other methods and means that are no less effective. This is called an asymmetrical response. The United States are building a huge and costly missile defence system which will cost dozens and dozens of billions of dollars. We said: “no, we are not going to be pulled into this race. We will construct systems that will be much cheaper yet effective enough to overcome the missile defence system and therefore maintain the balance of power in the world.” And we are going to proceed this way in the future.

As the US and NATO seem to choose deliberately to ignore Putin's warnings and go ahead with an arms race they have now drawn the inevitable --and expected-- response of retaliation.

It is this background to the current new aggression of the USA and NATO that the western media hides by trying to distract attention with events which have no bearing on the real dangers of US geo-strategic nuclear deployment.

In the 'eighties, it was the late radical historian, Edward Thompson, and the European Nuclear Disarmament movement that campaigned against US First Strike strategy and who alerted the world to its danger. Now there is no Edward Thompson or an END. So it is up to the likes of we humble bloggers to demystify the MSM spin and let the truth be known.

This story now at Bellaciao and Global Research, Ca

New comments are not allowed. 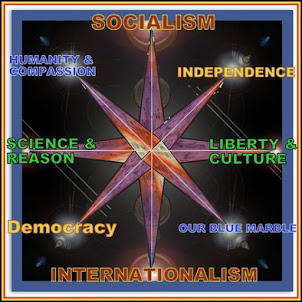 "If one values human life, one cannot value its destroyers." ~Ayn Rand, The Fountainhead

"Everywhere do I perceive a certain conspiracy of rich men seeking their own advantage under that name and pretext of the Commonwealth." ~Sir Thomas More, (15th Century)

"There is a time when the operation of the machine becomes so odious, makes you so sick at heart, that
you can't take part; you can't even passively take part, and you've got to put your bodies upon the gears and
upon the wheels, upon the levers, upon all the apparatus, and you've got to make it stop. And you've got to
indicate to the people who run it, to the people who own it, that unless you're free, the machine will be
prevented from working at all!" ~Mario Savio, University of California, Berkeley, 1964

“If we understand the mechanisms and motives of the group mind, it is now possible to control and regiment the masses according to our will without them knowing it.” ~Edward Bernays, CONSENSUS TRANCE

“Anyone who is forced from his own course, either through not understanding himself or through external imposition, comes into conflict with the order of the Universe, and suffers accordingly.” ~Aleister Crowley